The work in Richard Bryce's group is aimed at developing computational models to improve the accuracy with which molecular processes are described and understood in the condensed phase and then to integrate and employ these methods in the drug design and development process, involving collaboration with medicinal chemists, biochemists and biologists. 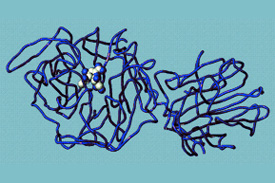 His research interests involve the development and application of accurate and efficient computational methods for structure-based drug design. A major focus of his work is the theoretical investigation of carbohydrate structure, energetics, dynamics and reactivity. This requires accurate treatment of aqueous solvent, which as led to the development and application of solvent models to carbohydrate analogue systems. The group employs a variety of computational techniques, including molecular simulation and hybrid quantum mechanical (QM)/molecular mechanical (MM) models.

More about the group and its research can be found in the "My Group" and "Research and Projects" tabs.

Richard Bryce heads up the computational-aided drug design group in the Division of Pharmacy and Optometry.  He is a Reader in Biomedicinal Chemistry, having studied chemistry at St. Andrews University (BSc, 1995) and computational chemistry at Manchester University (PhD, 1998).  He was a Robert Lincoln MacNeil scholar at the University of Pennsylvania (1992-1993) and a Ramsay Memorial Fellow at the University of Manchester (1999-2001).  His work receives support from a variety of sources, including EPSRC, The Wellcome Trust, MRC, BBSRC and the Royal Society.  He is a fellow of the Royal Society of Chemistry and member and former chair of the Molecular Graphics and Modelling Society.

Direct deoxydehydration of cyclic trans‐diol substrates: an experimental and computational study of the reaction mechanism of vanadium(V)‐based catalysis

LRRC8A is essential for hypotonicity-, but not for DAMP-induced NLRP3 inflammasome activation

Simulation of protein dynamics for mechanistic insight and drug design